Boon Wurrung Elder Aunty Fay Stewart-Muir and I have arrived in Darwin for the first stage of our Journey to the Top End as part of my Margery Ramsay Scholarship, Strengthening the Cultural Identity of Communities through Libraries.

On our flight over from Melbourne we shared a section of the plane with a whole family of musicians travelling back to Jabiru from the Melbourne Yirramboi festival. It was amazing hearing them speak in their Mirrar language, fast and full of life. Made me sad to think of Aunty Fay’s Boon Wurrung language and Fay now being one of only two speakers left. That is except for our little Balee Koolin Bubup bush playgroup children and families who are learning Boon Wurrung language and incorporating words into our rhymes, dance and bush exploration. Slowly the language is waking up again.

Darwin is on the traditional lands of the Larrakia peoples and we have bunked down in the old Hilton on Darwin Harbour in a very snug room, with two giant double beds with harbour view! Aunty Fay and I stocked up our little hotel bar fridge with healthy staples to avoid the Hilton munchie sting, and we have turned our armchairs around to face the Darwin harbour, sip on Sav Blanc and write away. Breaks away always inspire space to dream and reflect. 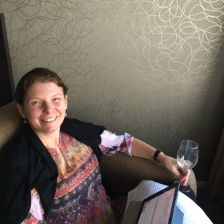 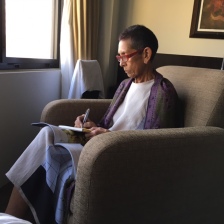 We fortuitously landed in Darwin on the weekend of the Garrmalang Festval. Garrmalang is a Larrakia word used to highlight a festival that celebrates the art and culture of the Aboriginal and Torres Strait Islander Peoples. The Garrmalang Festival showcases the best talent from right across the Top End and celebrates song, dance, language, knowledge, heritage, family and country. Aunty Fay and I attended the festivals opening night which hit off with Djuki Maka – Chooky Mob Dance performance. A high octane, big spirit and full heart show that had the crowds crying out for more. All of Darwin must have been there, communities from across Arnhem Land filling the balconies.

Today we were woken up at 4.30 am thanks to my resetting the wrong time on the alarm clock! However, we’ve been enjoying the quiet dark waiting for the sun to rise over the harbour, before our 6am pick up for the day tour to Nitmiluk Country or Katherine Gorge.